Arlington West and the Reality Based Community

Posted on July 31, 2010 by creativeconflictwisdom

On a visit to California I came across the monument to the fallen in Iraq and Afghanistan on the beach in Santa Barbara. Each cross representing a war death. There is also one in Santa Monica.

I am currently reading Rajiv Chandrasekaran’s excellent ‘Imperial Life in the Emerald City: Inside Iraq’s Green Zone’ that influenced the recently released movie The Green Zone directed by Paul Greengrass and starring Matt Damon. Forget for a moment whether the Iraq War decision was a good one. What shouts out of every chapter in the book, is the power of neo-conservative beliefs dominating any sense of reality. It is a fantastic case study in the power of ideology to delude. And it was that delusion that free markets, democracy, the American Way could be easily transplanted into Iraq that killed the young men and women commemorated in Santa Barbara. The military hated the Coalition Provisional Authority for its ideologically driven delusions, though Donald Rumsfeld had his own delusions around post-invasion planning.

The lesson this blog derives is the ultimate importance of keeping a grip on reality and not as the famous anonymous White House spokesman said to reporter Ron Suskind on October 17th 2004:

‘The aide said that guys like me were “in what we call the reality-based community,” which he defined as people who “believe that solutions emerge from your judicious study of discernible reality.” … “That’s not the way the world really works anymore,” he continued. “We’re an empire now, and when we act, we create our own reality. And while you’re studying that reality—judiciously, as you will—we’ll act again, creating other new realities, which you can study too, and that’s how things will sort out. We’re history’s actors…and you, all of you, will be left to just study what we do.’

This is the arrogance that got so many Iraqis, Afghanis, Americans, British and others killed, including of course those represented by the crosses above. Having worked in less lethal conflict, I am familiar with this sort of wishful thinking. My managers just did not get tens of thousands of people killed by such delusional thinking. Unfortunately there is no sign that conservatism has taken the lessons of reality on board in foreign policy, financial strategy, fiscal approaches or any other area of policy. The post 1989 Fall of the Wall ‘end of history’ arrogance may yet do us all in or at least greatly accelerate the relative rise of China: not quite what the Neo-cons had in mind but the law of unintended consequences is especially merciless to those who deny reality.

And in passing, none of those responsible, not Bush, Cheney (he who had ‘better things to do’ during Vietnam), nor Rumsfeld not once in five years, ever made it to Dover Air Force Base to meet the returning dead. 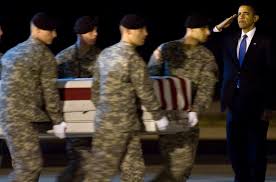 I spent 32 years in a Fortune Five company working on conflict: organizational, labor relations and senior management. I have consulted in a dozen different business sectors and the US Military. I work with a local environmental non profit. I have written a book on the neuroscience of conflict, and its implications for conflict handling called Creative Conflict Wisdom (forthcoming).
View all posts by creativeconflictwisdom →
This entry was posted in Conflict History, Middle East Conflict, Philosophy of Conflict, Ways to handle conflict and tagged Arlington West, Dover Airforce base, honoring the dead, remembering the cost of war. Bookmark the permalink.

2 Responses to Arlington West and the Reality Based Community