Posted on August 29, 2010 by creativeconflictwisdom

OK let’s be clear: I trained as an historian. I know some 20th century history. I know how many people Mao (40+ million) and Stalin (30+ million) killed in the name of Marx. (Cf. Hitler 34 million) So I am no apologist for Communism or Marxism or unsympathetic to the people of the former Soviet Union, Eastern Europe, China, North Korea who have suffered under the experiment of putting Marx into practice.

But I still want to ask if there is anything of value in his thinking that may help us with handling conflict. Indeed I hear Bond Traders in London and New York are reading Marx to better understand the economic crisis!

Something, apart from the pseudo-science, the historical determinism or other short cuts in our thinking, that would help in our understanding of complex realities?

In summary, thinking about Marx and about the current state of the global economic system, we can echo what the Chinese Prime Minister Cho En Lai, who famously said of the French Revolution in 1972, and say of globalization:  ‘It is too early to say’ We can ask this of the extreme individualist, de-regulated global economy, that has really only been around for about 20 years: is it sustainable? As Marx predicted, and as in some ways its greatest fan, capitalism has achieved huge strides in human wealth and has utterly transformed societies globally to a point where the starting point for any change is radically different from Marx’s time. But it is also too early to say if we have the right balance between individual and collective interests, or whether we need to create new institutions, or use different strategies to address issues such as environmental and climate problems, territorial clashes, religious wars and the shifts in economic power and manufacturing. And what of the new hybrid State Capitalism that is driving China to new positions of world power?

And to learn something from Marx, when we try to get real in a conflict situation, it is vital we recognize the distorting filters or lenses of economic and other self interest and correct for them as much as possible. But his view of human nature seems in retrospect to be way too optimistic. It is not as malleable as he thought, self interest is strong and new interests and desires emerge all the time, sometimes created by the market economy. The drive for social dominance by elites seems ever present in all the developed societies we can study. No society has succeeded in abolishing the ruler/ruled distinction or avoided special privileges for the rulers. So bringing harmony and resolving conflict is unlikely to be achieved without coercion, and coercion was not Marx’s way to end human alienation.

Now that Communism is so discredited, we are at risk of losing sight of everything of value that Marx had to say. His most interesting work is in the field of class conflict. But even more important than that, are his use of the Hegelian dialectic and its application to the forces that drive historical change. The concept that history proceeds from Thesis to Antithesis to Synthesis. Marx tied this powerfully to changes in the economic basis of society and this is a very powerful tool for use in conflict work and in dilemma analysis. It shows powerfully how self interests can distort our take on reality, so that our model suggests that, as we get clear on our self interests we check very thoroughly to ensure that they have not given us self-serving delusions about the situation facing us. This is not to say that Marx’s forecasts for the future were accurate; merely that he provides some useful tools for reconfiguring how we think about it.

Footnote: Someone once said I was either trained by Jesuits or Marxists, and indeed once upon a time I did read five of Marx’s books and have read at least five rigorous critiques of his work, starting with Karl Popper, and a few more sympathetic commentaries, though I cannot really find a reputable current advocate. Peter Singer’s Marx: A Very Short Introduction is an adequate brief account. But I am a million miles from the approach of Jesuits or Marxists and hate elites of any form deciding our destiny. I was trained by reading these folk very critically, by contesting them 🙂 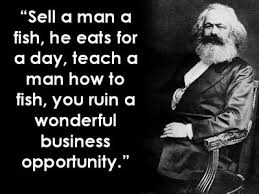 I spent 32 years in a Fortune Five company working on conflict: organizational, labor relations and senior management. I have consulted in a dozen different business sectors and the US Military. I work with a local environmental non profit. I have written a book on the neuroscience of conflict, and its implications for conflict handling called Creative Conflict Wisdom (forthcoming).
View all posts by creativeconflictwisdom →
This entry was posted in Conflict History, Philosophy of Conflict, Top Ten Conflict Tips from Great Thinkers, Uncategorized, Ways to handle conflict and tagged bond traders, Karl Marx, Marx, top ten conflict tips, top ten conflict tips from Karl Marx. Bookmark the permalink.