Posted on August 24, 2013 by creativeconflictwisdom

To keep bi-partisan on War, I re-post my post from 2010 on Republican President Dwight Eisenhower’s views on Conflict, to complement the previous quote from Democratic President Jimmy Carter. 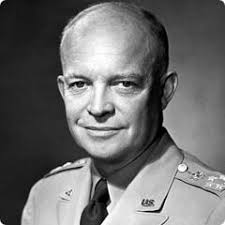 ‘I hate war as only a soldier who has lived it can, only as one who has seen its brutality, its futility, its stupidity.’

‘Every gun that is made, every warship launched, every rocket fired, signifies in the final sense a theft from those who hunger and are not fed, those who are cold and are not clothed.’

‘The problem in defense is how far you can go without destroying from within what you are trying to defend from without.’

‘In the councils of government, we must guard against the acquisition of unwarranted influence, whether sought or unsought, by the military-industrial complex. The potential for the disastrous rise of misplaced power exists and will persist.’

I spent 32 years in a Fortune Five company working on conflict: organizational, labor relations and senior management. I have consulted in a dozen different business sectors and the US Military. I work with a local environmental non profit. I have written a book on the neuroscience of conflict, and its implications for conflict handling called Creative Conflict Wisdom (forthcoming).
View all posts by creativeconflictwisdom →
This entry was posted in Conflict Statistics, Philosophy of Conflict, US Political Conflict and tagged Conflict, Dwight D Eisenhower, Jimmy Carter, War. Bookmark the permalink.