Posted on December 24, 2013 by creativeconflictwisdom

Just reading Alan Blinder’s excellent book on the 2008 financial crisis: ‘After the Music Stopped’ and he comments on how much ignorance there is on the TARP or Troubled Assets Repurchase Program that everyone now thinks threw $700 billion of taxpayers at Wall Street.

I thought, given all sides seem united in hating this program, the long term cost facts, as recorded by Prof Blinder might be interesting. The net long term cost of the program was not $700 billion, but $32 billion, consisting of $22 billion to save AIG, $19 billion to save the auto industry, $16 billion for mortgage relief set against a profit of $25 billion on bank shares bought, and sold, so a net cost to the taxpayer of $32 billion which (and I hate Wall Street excess as much as anyone and how they nearly destroyed the economy) seems cheap at the price for saving a 1930s style melt down. People get confused because $700 billion was the approved ceiling though only a maximum of $360 billion was used to repurchase assets.

And yes I do think we were within a few days of catastrophe or as President Bush put it in probably his most astute comment of his Presidency: ‘If money isn’t loosened up, this sucker is going to go down.’

It is hard to exaggerate how close a thing it was. I think the misunderstanding of the TARP number issue that most people have is about how much was initially spent to buy assets, shares etc. and how much these assets were eventually sold for. Most of the TARP purchases were eventually resold, some at a hefty profit that didn’t quite offset those sold at a loss. I think as I noted above around $360 billion out of the available $700 billion was outstanding at the peak  but that was not ‘spent’ so much as in effect loaned to stop the collapse. (The Stimulus which was part President Bush and part President Obama is something different where money was spent. And QE is different again and does not involve tax payers money.)

It seems to me that TARP was actually George W Bush’s finest achievement and he left a lot of flexibility to use it to President Obama, and the latter used it well too. Together the two of them saved us from a return to the 1930s along with Chairman of the Federal Reserve Ben Bernanke. Whatever these three guys many faults, they deserve a medal for keeping their heads when all about them were losing theirs…..

To understand why they deserve a medal, simply imagine  that libertarian clown Alan Greenspan at the Fed during the 2008 crisis, and either mercurial John McCain or ‘deep down he is shallow’ Mitt Romney in the White House….1930s here we would have come….this sucker would indeed have gone down…. 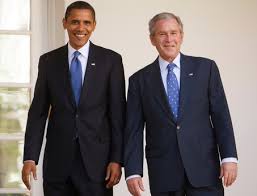 I spent 32 years in a Fortune Five company working on conflict: organizational, labor relations and senior management. I have consulted in a dozen different business sectors and the US Military. I work with a local environmental non profit. I have written a book on the neuroscience of conflict, and its implications for conflict handling called Creative Conflict Wisdom (forthcoming).
View all posts by creativeconflictwisdom →
This entry was posted in Conflict History, Economic Conflict, US Political Conflict and tagged 2008 Financial Crisis, Ben Bernanke, President Barack Obama, President George W Bush, TARP. Bookmark the permalink.