The Neuro-science of Conservative and Liberal Brains

Posted on September 30, 2016 by creativeconflictwisdom

Back in 1796, George Washington offered the nation some unheeded words of advice: beware of political parties. Despite this recommendation, two forces emerged in America and today the Republican and Democratic parties dominate the political scene, forming a deep partisan divide. But what does this divide say about their supporters? Why do some of us identify as conservatives, and others as liberals? According to some neuroscientists, the answer lies partially in the make up of our brains.

What are the brain differences?

In their search to unlock the mystery surrounding the political brain, researchers are discovering basic structural differences between conservatives and liberals. While it is generally difficult to make a direct link between brain differences and complex behaviors in social or political contexts, these findings give scientists some hints as to how biology may inspire political identity.

First, let’s take a look at the liberal brain. Studies have found that, on average, the brains of liberals have greater volume in a region known as the anterior cingulate cortex (ACC). This area has been linked to several functions, including conflict detection, which enables us to regulate our behavior by identifying discrepancies between instinctual, habit-driven impulses and our actual intentions. So whether you’re swerving to dodge a deer that’s abruptly run onto the road, or halting before eating that one rotten grape from the fruit bowl, you can thank your ACC for its conflict detection capabilities.

Beyond its greater size, the ACC of the liberal brain also fires more frequently while detecting these differences between instinct and intention. In a political context, this may enable liberals to approach policy issues with greater sensitivity to when their habitual tendencies are ill suited for addressing the issue at hand.

The conservative brain, on the other hand, has greater volume in a region called the amygdala, an almond-shaped structure implicated in emotional and fear-based learning. In one study, researchers found that when conservatives hear shocking noise stimuli, such as a blast of white noise, they exhibit more fearful instinctual reactions as measured by blink response, an indicator of amygdala activity. These findings have led some to speculate that larger and more sensitive amygdalae in conservatives may cause them to be more driven by fear and emotional rewards.

In another study, researchers investigated the emotional differences between the two groups and found that when faced with risky decision-making, the amygdalae of Republicans fire at a greater rate than those of Democrats. This suggests that Republicans might be relatively more influenced by emotions in their decision-making process. What’s more, a study found that conservatives were aroused to a greater extent than liberals when shown disturbing images, such as those depicting infested wounds. Simply put, it appears that the conservative brain is more sensitive to stimuli that carry emotional weight.

If my political affiliation is hard-wired, can I still switch it?

Well, in short, of course you can switch affiliations. However, people rarely do so, and it does appear that there are some neural obstacles to crossing the aisle. When it comes to politics, people tend to have pretty strong opinions, and aren’t always so receptive to conflicting ideologies.

Later, participants were given the opportunity to reflect upon the conflicting information, rationalizing and justifying their own points of view. As they did so, their brain scans showed increased activity in an area of the brain called the ventral striatum, which is integral to reward and value processing—the pleasant opportunity to justify one’s own political perspective could be observed at a neural level.

So, conflicting ideologies cause distress, but at least justifying our own beliefs solves the problem, right? Well, this might provide some emotional relief, but it also obstructs our openness to new ideas. These findings highlight some of the neural mechanisms underlying political stubbornness, explaining why many individuals tend to be stuck in their ways when it comes to politics.

In fact, this is especially true for those who are most politically involved, whether frequenting political discussions or actually running for office. Research shows that individuals who are more engaged in politics exhibit greater firing in the amygdala and ventral striatum while viewing statements consistent with their partisan ties. The amygdala is linked to emotional importance, while the ventral striatum is linked to reward value. Thus, political fanatics seem to find heightened intrinsic satisfaction to ideologies with which they agree.

These findings suggest that as we trudge deeper into the political world, we become more and more tied to our respective political parties. Scientists believe this may build a feedback loop that fuels polarization in the political world, motivating us to selectively seek out information that confirms our pre-existing beliefs. Even if we attempt to break from this self-perpetuating cycle, research also suggests underlying neural mechanisms that impede our capacity to empathize with members of the political out-group. It’s as if we are programmed in a way that is less than helpful for seeing alternative points of view.

When George Washington warned against the dangers of political parties, he probably didn’t realize the full nature of our uphill battle. Political affiliation is often chalked up to cultural factors such as family upbringing and geographical location, but research suggests that biology is also at play, predisposing us to adopt certain political ideologies, and also preventing us from letting them go. So the next time you find yourself absorbed in political debate, remember, changing someone’s mind may be just as difficult as changing their brain. At the same time, being mindful of our political biases might ultimately help us to bypass them and more rationally form our own opinions. 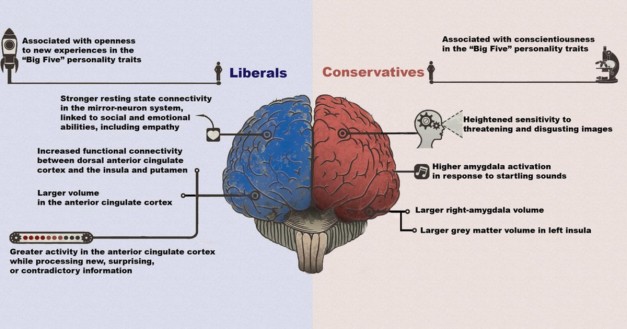 I spent 32 years in a Fortune Five company working on conflict: organizational, labor relations and senior management. I have consulted in a dozen different business sectors and the US Military. I work with a local environmental non profit. I have written a book on the neuroscience of conflict, and its implications for conflict handling called Creative Conflict Wisdom (forthcoming).
View all posts by creativeconflictwisdom →
This entry was posted in Conflict Processes, Philosophy of Conflict, US Political Conflict, Ways to handle conflict and tagged conservative/liberal brain differences, neuroscience, political polarization. Bookmark the permalink.

1 Response to The Neuro-science of Conservative and Liberal Brains